There are ships buried beneath downtown San Francisco.

I remember reading a news article about some very surprised construction workers finding a buried ship somewhere in the city. Today I decided to find out if there was truth to it. (Imagine standing between the skyscrapers of a modern city, knowing there’s a huge forgotten ship right beneath your feet.)

Most of what’s now the downtown area used to be underwater. When they filled it in, some ship owners decided for various reasons (expense, lack of crew, secrets to be kept) that it was best to just let the ships be buried in-place.

Searching online, it didn’t take long to find that news article, and a map of the known and suspected ship locations. That’s great, but my real question was “Can I see one?” So I walked across the city to the Maritime Museum at the Hyde Street Pier.

I told the man at the desk what I was up to, and he said “Seems like you’ve already got all the information you can get from the computer. Try the red telephone in the back.”

Eh, what? Sure enough, there’s a red telephone which looks like it belongs in an episode of Batman. I pick up the receiver, and find myself talking to a man at the Maritime Library.

Getting into the archives requires an appointment, so he transfers me to the appointments desk, where I find I’m talking to the same guy. We make an appointment for “however long it takes to walk over.” Up the stairs, ring the buzzer, and Ted (the man I spoke to on the phone) is there.

He’s already got some materials out for me. I look up the ship I’m interested in (a three-mast ship called Niantic, built in about 1830), pull a few cards from the catalog, and before I know it, Ted makes good on his offer and my whole table is covered with information that can’t be found on the web.

There’s no one else in the room, but I decide not to flow onto a second table; this is more than I’ll get through. My favorite is something called the “pam file” which is like a fat scrapbook of loose bits of information. 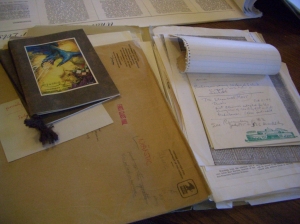 The discoverers in 1978 had limited funds, so they saved what they could before the rest was destroyed to create the foundation of a new building. They did recover hundreds of items, including several dozen intact champagne bottles. That’s pretty cool.

So here’s where things get interesting. On the chart which shows the dig site, only half the ship is there. Where the other half should be, it just says “UNEXCAVATED”. Ted says “Yeah they usually can’t get the whole thing, property lines and such.”

Now I’m intrigued. Most likely, someone else demolished the rest of it for some other building, but maybe not. Suppose there’s still half a ship down there. The dig-map says it’s under “Redwood Park” which sounds nice, but I’m sure there’s no redwood park between the skyscrapers.

I’m restless in the map room, so I decide to just go see the site for myself. Half an hour later, I’m there. Well I’ll be damned, there’s a redwood park between the skyscrapers. 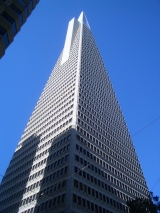 This ship’s not thirty feet from the city’s skyline icon, and it’s still down there. Looking at my notes, I walk over and stand on the exact spot, imagining I can see half a ship under my feet.

If the wreck is haunted, at least the ghosts have good champagne.

On the walk home, I stop to pick up a bunch of fresh clams, a baguette, two ears of corn and a fresh mango. My muse has been at work all day; it can’t hurt to cook her dinner.

I also stop to pick up flowers from Andre and Lisa, the owners of the best flower shop in our neighborhood. Last winter, we got to know them by inviting them to our place for a rowdy night of drinks, homemade desserts and excellent stories.

Random assertion: Over time, people misplace the most amazing things, passing them as gift-wrapped surprises for their descendants to discover.