I had some excellent curry with Erick at the Liberties Bar on Guerrero and 22nd, then went face down (read: sound asleep) in a good sci-fi book at the sunny park nearby with a nice view of the city.

Collected info about volunteering at the Exploratorium and the National Parks Conservancy (hoping for some kind of manual labor which doesn’t involve computers). I’ll fill out applications and see where it goes.

Wednesday nights every week are for acrobat training. Specifically, flying trapeze. This is what I was doing when I met my muse.

Note: You can take a class on any weekend morning! You’ll love it. Check out the class description: “Beginning drop-in class – Prerequisites: none.“

Remember the training room from Day 3’s post? Here’s how it transforms into a serious aerial playground: 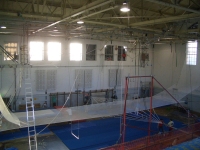 The “board” is a thin platform high off the ground we use as a jumping off point. 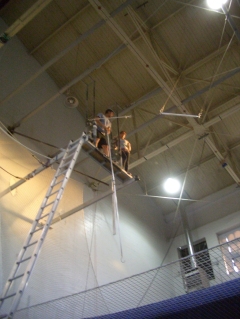 Scott and Melissa on the board

Scott Cameron (in the picture above) was my first flying instructor. If you’re just there for fun, he can help you have a great time. If you’re ready to get serious, he can teach you anything.

Here, Melissa’s ready for takeoff, with Alan and Jonah standing by. She’s wearing safety lines, because the trick she’s doing is a new one. On the right, Jennings is ready to keep her safe, no matter what. 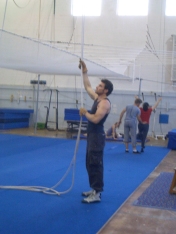 Jennings has a great many special abilities (more than most in the school), and an awesome sense of humor. I’ve literally trusted him with my life, too many times to count. Including tonight:

That’s me on the left, with Jennings catching.

Notice that there’s padding on one of the ceiling beams:

Why on Earth would you pad a 35-foot-high ceiling beam?
…eh, so we don’t bruise our knuckles and foreheads on it. That’d be me in the rafters:

Melissa on the board, while I’m getting all up in the ceiling

Here’s one of those difficult-to-photograph moments. That blurry smudge in the middle of the picture is some rapidly-flipping UFO wearing the same red shorts and black t-shirt as me. 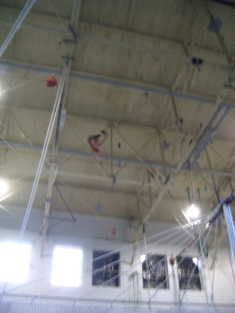 It’s actually good that the photos don’t come out so well. When you need to use this stuff for real, you’re usually trying not to be photographed. If there’s no proof, there are fewer awkward questions to answer.

It’s late when I get done flying, I’ve got net marks on my back and parts of me hurt, but I feel so good that I won’t even try to sleep yet. Wednesdays rule.

So instead of sleeping I took apart my computer to repair some damage my cat did to it today (everything’s a toy for her, as you can see in this post). The computer is old, but it’s been through so much with me that I’m kind of attached to it, and I really like using it. Repair job worked again, so I’m able to type this sentence. Whew. Now a walk to Firewood to get some quick late dinner.

There’s a line around the block to see the midnight showing of the new Indiana Jones movie at the Castro. I’m not in the line, but I’m sure proud of my friends at work who made it happen.

Random Assertion: Technology will never be so advanced that whacking it on the table can’t fix it.

One thought on “Day 5: Playtime”